A Drugmaker Pitches Its Product to Judges

A Drugmaker Pitches Its Product to Judges

The company, Alkermes, manufactures the drug Vivitrol. Vivitrol is a monthly injection of naltrexone, which blocks opioid receptors in the brain. It’s one of three medications approved by the Food and Drug Administration for treating opioid addiction.

This NPR article reveals significant information about the marketing strategies of one pharmaceutical company and its influence upon our justice system, and raises some very important questions that deserve further research, investigation and hopefully, policies which prohibit or regulate such practices by drugmakers.

A Need for Regulation

Drug companies have a long history of influencing the medical community with perks, bribes and other unsavory marketing methods. Can we trust our local, state and national justice department personnel to withstand the pressures placed upon them by pharmaceutical sales representatives?

One reason for this preference is that Alkermes, the drug’s manufacturer, is doing something nearly unheard of for a pharmaceutical company: It is marketing directly to drug court judges and other officials.

The strategy capitalizes on a market primed to prefer their product. Judges, prosecutors and other criminal justice officials can be suspicious of the other FDA-approved addiction medications, buprenorphine and methadone, because they are themselves opioids. Alkermes promotes its product as “nonaddictive.”

The drug court Kirby went through doesn’t allow medications other than Vivitrol for treating addiction. In fact, NPR and Side Effects Public Media have identified at least eight courts out of the several dozen in Indiana that say they only allow Vivitrol treatment.

NPR and Side Effects Public Media have learned that Alkermes sales reps have also marketed the drug to court officials in Missouri and Ohio. A report from ProPublica found that extensive marketing is leading judges to favor Vivitrol around the country. 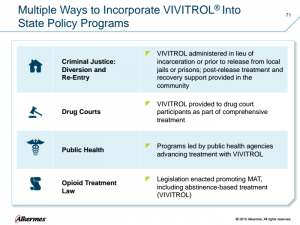