This is an article about the keynote presentation from Day 2 of the Multiple Pathways of Recovery Conference 2019.
The keynote speaker was Don Coyhis of the Mohican Nation. Coyhis is the President and Founder of White Bison, Inc., an American Indian non-profit organization that offers “sobriety, recovery, addiction prevention, and wellness/Wellbriety learning resources to the Native American/Alaska Native community nationwide.”
It would be nearly impossible to meaningfully impart a full understanding of Coyhis’ talk. However, a sampling of his comments may give a sense of his observations and parts of it may become available online in upcoming weeks. 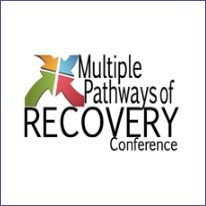 The beat of drums marked the start of Day 2 of the Multiple Pathways of Recovery Conference (MPRC).

This morning’s keynote speaker was Don Coyhis of the Mohican Nation who began his presentation by introducing native American musicians whose traditional drumming and singing called attendees together.

It would be nearly impossible to meaningfully impart a full understanding of Coyhis’ talk. However, a sampling of his comments may give a sense of his observations and parts of it may become available online in upcoming weeks.

At a high level, Coyhis told conference attendees that addiction and other family and community tragedies are just symptoms of deeper issues. He made it clear our efforts must focus on dealing with the social, historical, familial, economic and spiritual problems that lie at the root.

Coyhis applauded the increase in diversity of the MPRC audience, pointing out that “we won’t heal without one another. The creator didn’t make four races, the creator made one race — the human race.”

Coyhis, who has logged 41 years of continuous sobriety, said he “loves the idea of multiple pathways. There are many different ways people are getting into recovery and getting sober. This is the way of the future.”

White Bison was founded in 1988 as Coyhis faced the task of how to address addiction issues plaguing more than 570 tribes in the US and Canada. He quickly realized that no one approach would fit everywhere and made the point clear by noting that a strategy aimed at a tribe whose culture revolves around whales would not translate well for a prairie-based tribe.

The first community Coyhis worked with after founding White Bison was in Maine, a community consisting of 4,000 tribal members, 85% of whom had a problem with alcohol. The tribe also suffered from widespread, endemic sexual abuse. After a year of work Coyhis felt they hadn’t moved the needle, which he reported to his Elders. The Elders counseled him to continue his work and to focus on the past to better understand the present.

“We went back 200 – 300 years to find out what was done then because the past is connected to the present,” Coyhis said. “It’s important for us to know what happened back there. There was a life force there. There was a sustainable system. It was very organized, very intelligent. There was a world you could see and a world you could not see…the spiritual world. They would go into the spiritual world, find a solution and bring it back out,” Coyhis explained.

Understanding the past included confronting the cultural trauma that has continued to poison the present. He showed a short film documenting a Federal program to “civilize” the Indian nations by forced re-educate of Indian children. More than 100,000 children were taken from their families and sent to over 500 boarding schools established across the country.

“It was torture, it was brainwashing. It destroyed our family,” Coyhis said. He sees the impact of that history expressed today to the point where many communities suffer from “lateral violence” — in which nations are doing damage to themselves. He feels that addressing such cultural issues must be part of any attempt to address the symptom of addiction.

“Are we going to look at symptoms or causes?” Coyhis asked “I don’t know anyone who just has a problem with alcohol.”

But despite the size of the problem, Coyhis remains hopeful. “This is the generation that is going to break the cycle,” he predicts. “More powerful than the march of mighty armies is the idea whose time has come.”